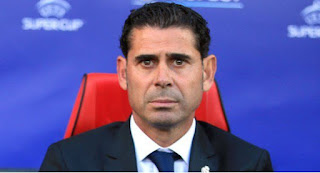 After the shock dismissal of Spanish coach Julen Lopetegui by the Spanish federation after his unveiling as new Real Madrid boss, the LaRoja already have Fernando Hierro as a replacement.

The former Madrid and Bolton defender was previously the sporting director of the national team and will now be in charge of Spain’s national team at the World Cup in Russia.

The Spaniards will take on Portugal on Friday and Hierro will be in the dugout managing the team.


Julen Lopetegui was fired after he was named as the boss of Real Madrid following the departure of Zinedine Zidane who left after Madrid’s 3rd straight Champions League win.

His only managerial foray was with Real Oviedo in Spain’s Segunda Division for the 2016-17 season, though he failed to take the club to promotion.

Spain are one of the favourites of the competition having won it in 2010 in South Africa sandwiched between two European championships.