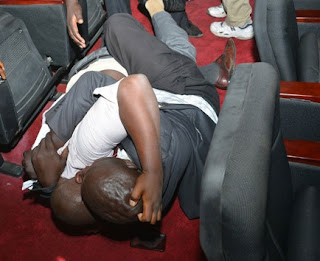 A middle-aged male principal of a private secondary school in Anambra State, at the weekend, narrowly escaped being lynched by angry youths in Okija in Ihiala Local Government Area for allegedly having unlawful carnal knowledge of a 17-year old boy of his school.

There were reports that Mr. Modestus Eze, the Principal of Seat of Wisdom Secondary School, had been committing the offence for many years, although he had not been pinned down until the recent incident when he was caught in the act.


It was gathered that Eze was fond of asking any male student he had interest in to wait after school for an errand for him, or invite him to his house at weekends, only to lure such a student to his residence for homosexual activity.


The action was said to have triggered anger from some youths who almost set the suspect ablaze, but he narrowly escaped.

According to an indigene of the town, it took the intervention of the Police and some prominent persons in the area to restore normalcy and pacify the rampaging youths who attempted to set Eze’s house ablaze.


What was said to have angered the youths more was the alleged discovery of substances suspected to be charms and deities sprinkled with red substance suspected to be fresh blood in some rooms within the school premises. As soon as the discovery was made, the youths mobilized themselves to deal with him, not knowing that he had escaped.

Police Public Relations Officer (PPRO) in Anambra State, Mr. Haruna Mohammed, who confirmed the incident, said the suspect was still on the run, but assured that efforts were being intensified to apprehend and bring him to justice.

The PPRO said the scene of the crime had been cordoned off by the Police, while investigation was continuing.

Meanwhile, detectives attached to Okija Police Station had taken the victim to a hospital in the area for medical examination.