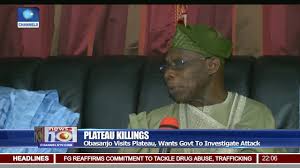 A former President, Olusegun Obasanjo has called on the Federal Government to properly investigate the murder of over 100 persons in Plateau State.

The former President made the call on Wednesday when he paid a condolence visit to Plateau State and met with Governor Simon Lalong.

Saturday’s attacks and killings in Barkin Ladi Local Government Area of the state have been widely criticized with many calling on the Federal Government to take decisive action to arrest the attackers and end killings across the nation.

For Obasanjo, it is important to understand the immediate causes of the attacks in order to prevent further attacks and killings.

In investigating the killings, the former President expects the Federal Government to work with the state government, local government and community leaders.

Governor Simon Lalong, on his part, described the attacks and killings as very unfortunate.

This, he said, is because “if there is peace in Plateau State, everybody will be very happy. But the moment the peace is threatened in Plateau, many other places will be threatened”.

The governor, however, believes the right steps have been taken to maintain law and order in the state.

“We have done our best within this short period; we have learned our lessons and we are doing our best to maintain the peace. Like you said, we need peace not only in Plateau but all over the country,” he said.