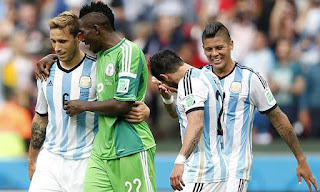 Some supporters of the Super Eagles have warned the team against defensive play in their third group match at the FIFA World Cup in Russia.

The Nigerian national team will file out against Argentina in their third group game on Tuesday.

The Super Eagles, which fell 2-0 in favour of Croatia in their opening match, defeated Iceland 2-0 in the second group game.


Tonye Orabere, a sports reporter, told News Agency of Nigeria (NAN) that a defensive play pattern against the Argentine side would not produce needed result.

He said “we need to show the kind of aggression shown during the second half of our match against Iceland, we need to be proactive.

“This game should bring out the best in the Super Eagles, it is a game they must use to make their supporters happy.”

Another supporter, Christopher Nkwachukwu, a civil servant, said that the Super Eagles should move for an early goal against the Lionel Messi-led side.

“They can achieve this by keeping Messi on good check, they must ensure that he is rendered unproductive and adequately caged,’’ he said.

Eshiet Bassey, a commercial driver, said that there may not be need for any formation change during the game, saying, “ what we need is aggression and resilience’’

“We must agree that the Argentine team is a strong side; we cannot afford to give them any opportunity to stay long within our half.

“ This is the game to decide our fate, we must approach it with the right spirit to enable the team move to the next stage of the game.” (NAN)