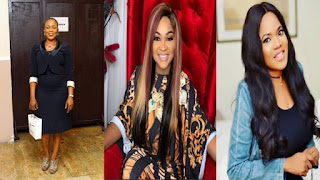 Popular Journalist, Kemi Ashefon has penned down an open letter to actresses Mercy Aigbe and Toyin Abraham on their ongoing rivalry.

I’m not a fan.
I’m just a journalist who observes Nollywood and it’s happenings.
I’ve spent over 20 years on this job and should be able to know that Life is vanity.

I’ve seen rich men rise and fall.
I’ve seen the poor becoming the rich.
I’ve worked in a rich man’s company who, when dead, his wealth went down with him.
I’ve seen and written about the famous becoming beggars and dying without recognition.

But I’ve come to realize that Grace is the ultimate.
It keeps you from falling and makes you the Best at whatever you do.

For these two actresses, Mercy Aigbe and Toyin Abraham, you are products of God’s Grace.

Never allow the world, people, envious colleagues dash into pieces, what God has freely given unto you.

We are mothers. We are builders. We make the world go round.

It’s becoming embarrassingly ridiculous when a very young actress takes to social media to employ terrible words in describing her fellow colleague all because those involved allowed it degenerate to that level.

I know you didn’t tell anyone to curse anyone that but they are latching on your names to do the unthinkable!

When you embrace peace, they will chill!

Millions of your followers are watching to see what comes out of this issue.