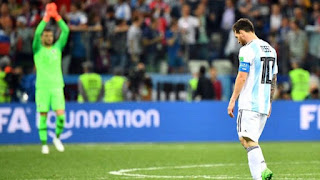 Argentina superstar Lionel Messi has insisted he “cannot give up” his dreams of winning the World Cup for Argentina as they face Nigeria in a decisive World Cup Group D clash on Tuesday.


Messi’s dreams of World cup glory are fading off after his country was held to a 1 – 1 draw against Iceland and humiliated in a 3-0 defeat against Croatia.

The lost against Croatia is La Albiceleste’s biggest defeat in the group stages of the World Cup since 1958.

Argentina need a victory to be sure of progressing to the next phase of the competition. But a draw is sufficient for the Super Eagles who beat Iceland, a team that held Argentina to a 1-1 draw, 2-0 on Friday.

Messi, who turned 31 on Sunday, said the competition meant much to him and his country after a career in which he has won absolutely everything else.

“It means so much because for Argentina the World Cup is special – and for me too. I’ve always had the dream of watching me raise the World Cup. And then seeing the emotion that goes with it,” he told Mirror UK.

“My hair stands on end just thinking about that moment. It would make millions of Argentine’s in the world happy. So we cannot give up on that dream.

“I have won all the most important tournaments but I am ambitious to the end. I would not like to retire from active football without being a world champion with my country.”