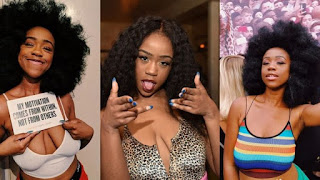 Controversial London-based, Nigerian blogger and presenter, Chidera Eggerue popularly known as ‘The Slumflower’, has said she looks forward to where men mysteriously die off one by one.

According to her, men should be euthanised. She said this while reacting to a news about police preparing for domestic abuse surge as England start World cup campaign.

Chidera is the same lady who accused music executive, Don Jazzy of body-shaming her. She is also the convener of “Saggy boobs matter”.

See her tweets below: