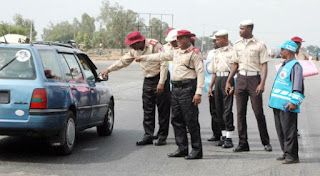 The Federal Road Safety Corps (FRSC) has deployed over 1,000 personnel including regular and special marshals to major highways in Ogun to oversee traffic activities during the Eid-El-Fitr.

Mr Clement Oladele, the Ogun Sector Commander, made this known in a statement issued on Wednesday in Abeokuta by the Command’s Public Education Officer, Mrs Florence Okpe.


The sector commander explained that there was need to be extra careful while driving along Lagos/Ibadan Expressway, especially the 5km stretch of the road where traffic was diverted.

“The statement is on the need to be extra careful on our major highways, especially during the Eid-El-Fitr celebration because there will be more vehicles on the road.

“The FRSC in Ogun have commenced the 2018 Eid-El-Fitr special patrol operations from Wednesday, June 13 to Monday, June 18.

“Necessary operational equipment had been stationed at strategic areas on the highways,” he said.

Oladele noted that the command had also embarked on aggressive motor parks public enlightenment campaign across the state.

He said that motorists traveling during the period should be careful and pay special attention to construction areas where overtaking is prohibited.

The FRSC boss appealed to motorists to demonstrate the reason of the season by showing love to other road users by obeying traffic rules to arrive home safely to celebrate with their loved ones.

He, therefore, warned that any motorist apprehended flouting traffic rules would be prosecuted.(NAN)