Eagles prepare for St. Petersburg’s cold ahead of clash with Argentina 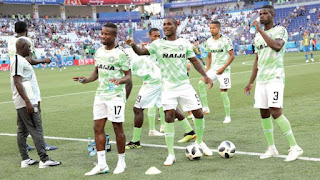 The Super Eagles know that tomorrow’s clash with Argentina will not be any holiday and so the team is doing everything to ensure it is up to scratch for it. It is taking nothing for granted, including the weather conditions, which keep changing from city to city.


While Volgograd, venue of Friday’s match with Iceland, was just what the doctor prescribed for Nigeria, St. Petersburg will pose a different condition as it is predicted to be far colder than anything the Super Eagles have encountered in the last six months. Volgograd fluctuated between 26.6 Celsius and 27 Celsius on Friday, but St. Petersburg is expected to be as low as between 18 degree Celsius at the worst and 22 degree Celsius tomorrow.

According to an official of the Super Eagles, the team has changed its training pattern to be in tune with the conditions expected in St. Petersburg.“Normally, we usually rest for a day after a match but the coaches took the team to training on Saturday as part of preparation for Tuesday’s match. We know St. Petersburg would be much colder than Volgograd, so we want to be prepared for it,” he told The Guardian.

He revealed that the team was not worried so much about the weather because most of the players live in Europe and are used to such conditions. “Ahmed Musa, Bryan Idowu, Leon Balogun and the players based in England are familiar to Europe’s extreme cold weather. But then we want to be prepared for on the pitch conditions, which is very important.

“We will train in St. Petersburg this evening and have a feel of the pitch on Monday. The players and officials are ready for anything they will face in the game against Argentina, but we are also working to ensure we don’t experience any surprise in the game,” he said.

Nigeria will face Argentina in its final group match tomorrow in St. Petersburg. If Nigeria wins, it will advance to the round of 16. But if Argentina claims all three points, it can still advance depending on the result of the other match between Croatia and Iceland.