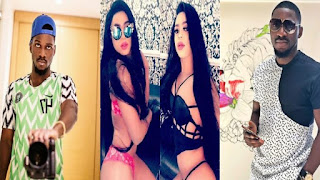 Controversial Nigerian cross-dresser, Bobrisky has apparently set his sights on a new man and he is none other than Former Big Brother Naija housemate, Tobi Babre.

Bobrisky who has previously made public his love for Wizkid, Davido and Kcee seems to be considering Tobi as a prospective recipient of his affection.

The male cross dresser shared a picture of Tobi Bakre and declared that he is really cute.

Meanwhile, he took to his favorite social media platform, Snapchat to declare that he would not be sharing any nude pictures of himself again.

Bobrisky, came to this decision after he shared some bikini thong photos and revealed that he got numerous advances from men who littered his DM with d!k pics.