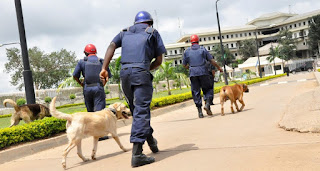 The Commandant General, (CG) of the Nigerian Security and Civil Defence Corps ,NSCDC, Abdullahi Gana Muhammadu has ordered the deployment of 45, 000 personnel across the nation for the sallah celeberation.

According to a statement, Wednesday, from the corps spokesman, Emmanuel Okeh, said the directive became necessary following the declaration of Friday 15th and Monday 18th June, 2018 as public holidays.


He said the CG charged the state Commandants to work in synergy with other sister agencies and urged the personnel to be civil and diplomatic in their approach to the populace.

He added that, personnel would be deployed to prayer grounds, shopping centres, malls, recreation centres, black spots and areas considered to be vulnerable to attack noting that hoodlums, vandals, terrorists and those with nefarious act targets festive periods to carry out their dastardly act.

“While congratulating Muslim faithful for carrying out the spiritual exercise of fasting and praying for 30 days, he urged them to emulate the qualities of Prophet Mohammed by living an exemplary life that depicts their true practice by preaching and praying for peace in the nation” the statement reads.