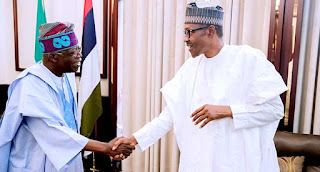 A national leader of the ruling All Progressives Congress, Asiwaju Bola Tinubu, has said that President Muhammadu Buhari deserves a second term come 2019.

He said this while giving an address at the official conferment ceremony of the award of the Grand Commander of the Order of the Federal Republic (GCFR) on the late MKO Abiola on Tuesday.

According to him, the president has kept his key campaign promises to Nigerians and should be given another chance to do more.

“Farewell to poverty, it’s not a question of a second term – you deserve it. We’re going to work for it, no annulment of it, we are going to win with you.


“It’s the struggle of Africa to banish poverty. You are investing in education; which is the greatest weapon against poverty, you’re feeding our children, we are no longer paying for darkness and we are able to feed ourselves, not importing toothpicks anymore, thank you Mr President,” he said.

On the honour given to Abiola, the former Lagos State Governor said regardless of what people say, the President should remain rest assured that he made a good move and always has his support.

“You made a promise that you will be committed to transparency, rule of law and bring about compliance with the constitutional democracy, you’ve done it now.

“Yes, the authors, writers, columnists will come up with all sorts of analysis about why you did it, yes you did it.

“The creed of the campaign of the man whom you honoured principally, was hope.

“Thank you for bringing hope back to Nigerians,” Tinubu said.