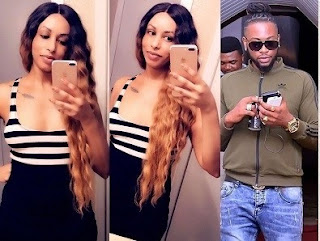 Former Big Brother Naija 2018 housemate, Teddy A, has been publicly called out by his Dallas-based baby mama, Layla Amani, who took to her Twitter on Sunday and threatened to open a can of worms on the TV star. She also said the singer is fake and a manipulator.

Layla is also claiming Teddy A has refused to take care of his son, but he goes around giving his fans cash gifts, living ‘a fake life’ that he is not worth.

“Before you give money to fans left and right take of your kid first smdh. Ain’t playing with you nigga I am allergic to bullshit. Fear what you don’t know

I got so much prove on your ass so don’t Bleep with me before I scatter your fake life mumu. I’m trying to keep my cool but I guess u like my wahala. Oya Hurricane Layla on the way to scatter everything with facts.

Whatever ppl thing of me don’t matter I’m tired of taking care of my son while you’re there having fun Nd living the fake life, fake everything. I keep warning you but your mumu self Won’t listen, arrogance will kill you

I have time today. How many time I warned your ass. U can lie don’t them but not me cuz you know the secrets I got on you

Why these mother fuckers thing is ok to let a mother take care of their pikin while u here having fun, nah I’m not one of those BM. You are so manipulative only a mumu can’t see it

I go with the flow, you want wahala I’ll serve it you want peace u know what to do. For 5 yrs I been taking of my son the first you send him money was on his bday, so don’t tell I didn’t try o

I call him send him messages to keep peace but I guess he like to Bleep with me #imthewrongbabymomtoplaywith. Your son should be your priority nigga.

They don’t know the way I know you so stop bullshit Nd be a good father to your son nd stop deceiving yourself biko, Nobody hacked my account o”