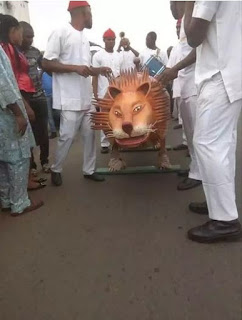 A Nigerian ‘rich man’ has been buried at Enugu state in a lion-like coffin.


According to reports the corpse of the deceased rich man was buried in a casket molded into the shape and likeness of a lion. A Facebook user who happened to be the friend of the deceased expressed his shock at what he saw upon his arrival at Enugu on Friday, April 6,2018 for the burial. Adding that he had to ask the mortuary attendants why he was to be buried in a lion-like casket and they told him it was because the man was rich before his death.

Above all, we pray that the soul of the departed will rest in the bosom of the lord.