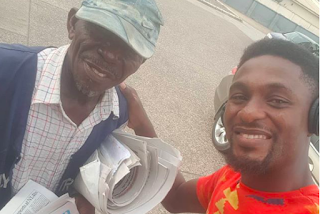 Nollywood actor Adeniyi Johnson has shared the story of how he helped a vendor off the street.

Read his piece below;


Sometimes ago on my way back to Lagos from a journey I saw this man pouring out his frustration about things and life in general, he’s a vendor mostly at the mobile filming station immediately after challenge as if coming to lag… I made a video of him and posted on my instastory, thereafter a man from America messaged me that felt his pain he said to me “can you get me this man’s contact I wanna help him,” Today on my way back from my usual waka I branched where I saw him it took us (myself and the attendants) close to 25mins to find him I patiently waited and made sure he was found.. upon seeing him network went gaga as I was trying to make a video call so the benefactor can see him, I felt bad and down then I promised to come back to him I saw bigger frustration on his face I was moved to tears as I drove out of the filling station.. about connecting to the main express the guy called on a direct call and spoke with the aged man, took his number and I want to strongly believe that it’s the beginning of a new life and story for him… Moral lessons: favour found him where he’s working and not at home or begging alms.. God sees all effort no matter how little and he will reward in due season… God bless you for taking time to read and for deciding to help someone today more importantly as u decide to do something no matter how little henceforth… not all videos are meant to shade people and kindly spread love… SHALOM …. Thank you