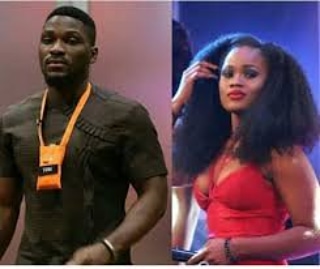 Tobi during a heated argument accused Cee-c of touching his manhood while they cuddled each other under the duvet few weeks ago.

Cee-c, who revealed she is a virgin, denied the allegation, adding that she was not interested in any sexual relationship.

However, viewers have faulted the duo for their childish and immature acts.

Here are some comments:

Scantygella: Ceebi had something good going on 1st&2nd week so there’s definitely nothing wrong with CeeC grabbing the manhood and feeling the C. I don’t even know what she’s defending. She could’ve handle the situation like a boss but No, she has to be the normal CeeC we all love and hate

Ebube : Tobi is mentally a 4 year old. What a fucking child. He’s now painting her black to everyone like he denied he did

Melinda : Yes I like Tobi and CeeC was the first chick I liked in the house but truth is we see obvious actions. No guy wants to be with a lady with so much negativity. And the fact that she’s never sober about anything makes anyone automatically defensive

Dayp: Tobi even if she did, a big man keeps quiet

Eccelumen : A lot of facts are just popping up tonight, biggy where’s the video of the d*ck holding escapade? Cos we need to know who’s telling the truth at this point. But tobi is acting childish jor. A gentle man doesn’t kiss and tell. Shut the fuck up man!

WandyO: She wanted the fight, she got the fight! And now she says she is embarrassed, I cant stop laughing, so she touched Tobi before/after threatening to report if he touches her! She provoked him and she got served!!!

Mys_p: There’s no solid evidence but if Tobi said she touched his dick, Cee-c DID THAT SHIT!!

Tochux17: Tobi just fucked up, he shouldn’t have gone that far to embarrass cee c like that. This tobi really need beating for even gossiping her.

Kenzycube; Tobi is a fucking kissing and tell nigga! A fool n big disgrace… we saw the video’ she didn’t hold anything#BBNaija

Branded Tokunbo : I don’t like kiss and tell and Tobi is the kind of guy I won’t want to have a real G’a conversation with. Childish AF