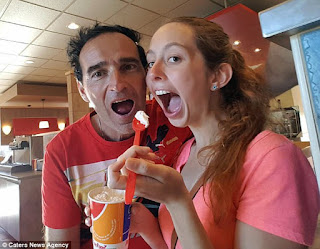 A woman has defied her family to fly many miles from home to be with a 53-year-old man who is the love of her life.

A 19-year-old has revealed how she plans to marry a man 33 years her senior after they fell in love while chatting online.

The photography student says she was initially attracted to his 'handsome' photo online and after months of speaking multiple times per week over video chat, they decided to finally meet - and they've been together ever since.

But after telling her parents about William, they told her to end the relationship, took her passport away and sent her to a psychologist.

Determined and love-struck Michaela went against their wishes to get her passport reissued and flew 1,500 miles to be with her other half in Alberta, Canada.

Two-months-ago, the pair with a 33-year age gap got engaged but say they are holding off on the nuptials until next year when Michaela's parents have had time to 'adapt to the situation'.

Until then the couple who are often affectionate in public 'laugh it off' when they are confused for 'father and daughter' rather than future husband and wife.


'The first time I saw William's photo, I was thinking 'Wow, he's handsome' and was attracted to him straight away. 'I liked his nose, it's cute and crooked - because his mom broke it as a child - then he has the most gorgeous light brown eyes that are completely breath-taking.


'I didn't know who he was at first, but he caught my eye and after we started talking more and more, gradually I realised I was falling for this man.


'We were video calling on Facebook almost daily, if not three to four times a week, dependent on his work and my school schedule.


'He made the first big move by saying 'I love you' and I said it back a month later, he hit all the right areas with me apart from me living in America and him in Canada.


'My plan was to go and visit him without telling my mom other than leaving a note, but my man wanted me to tell her before I left.


'Then both my mom and William wanted me to tell my dad, I had a bad feeling about telling him and I have never seen him so upset in my life.


'Then I was sent to see a psychologist, who agreed with what my parents wanted that I had to 'end it' with William.


'Because I had given my mom my passport after telling my parents about, what should have been, my vacation with William, I had to apply for a new one and set aside money for myself to move in with him.

'But as soon as I saw him at the airport I dropped my luggage and ran, I was so excited and overwhelmed to finally meet face to face.

'He made me feel like I was at home immediately and it's been great ever since, a few months ago he asked me to be his wife, I couldn't ask for a better man as a husband.