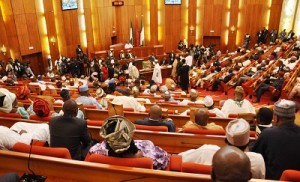 The National Assembly have kicked against the Federal Government’s 2018 budget proposal, saying its assumptions are unrealistic.
The Senate and the House of Representatives, which began debates on the 2018 Appropriations Bill on Tuesday, were disgruntled at the Federal Government for not implementing the 2017 budget.
For instance, the Senate said the capital component of the 2017 budget had not been implemented up to 20 per cent.
The upper chamber also urged the Federal Government to sell or scrap agencies such as the National Orientation Agency, Federal Radio Corporation of Nigeria, Voice of Nigeria and the Nigerian Television Authority.
It said the government had been spending money on the agencies, which had not been adding any value to the country.
The debate started on a dramatic note when Senator Enyinnaya Abaribe dismissed the 2018 budget proposal as being “fictitious.”
The Majority Leader, Senator Ahmad Lawan, however, raised a point of order and faulted Abaribe for describing the bill presented by President Muhammadu Buhari as fictitious. Lawan urged the lawmaker to withdraw the word “fictitious” and use another word that was “parliamentary and acceptable.”
Withdrawing the word, Abaribe insisted on his position, saying, “I am just quoting the Senate Leader from his speech, in which he said the 2018 budget was designed to consolidate on the achievements of the 2016 and 2017 budgets. What was done in 2017 when less than 15 per cent of that budget was released? Nothing was done and that was why I called it (the 2018 budget proposal) fictitious. I am very sorry if that is the word he is bothered about. I will withdraw the word ‘fictitious’ and use ‘totally imaginary’.
“In what sense will this 2018 budget be predicated on assumptions that have already been destroyed? You are assuming N11tn, yet you are getting less than N1tn. How does that happen? That is why I said, with all due respect to my colleagues, that it is imaginary.
“I am saying that rather than continuing to debate this (budget) that has no basis in reality, we may just continue to beg this government to please be specific in the indications the assumptions underlying this budget. The assumptions are totally wrong, totally off the mark, and, therefore, the 2018 budget is already dead on arrival.”
Source: ( Punch Newspaper )