‘I Am Jealous Of Neymar, Will Love To Play With Him’ – Okocha 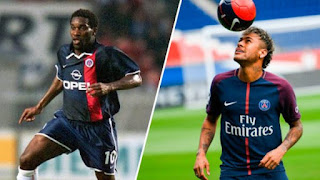 Former Super Eagles skipper, Austin Jay Jay Okocha, has expressed his jealousy at the current set of players.
Okocha, who was once African football’s most expensive player, said this in an interview with CNN Sports.
Fondly referred to as JJ, the skilful player said he felt glad being among the best during his active soccer days.
Okocha retired from football in 2008.
“I am jealous of the players now. But it’s always good to know you were amongst the best during your time and that’s all you can hope for,” he said.
“I don’t look at what the market is today because that was our mission — to get football to another level — to open doors for the next generation. It gives me a lot of joy to see where football is now.”
The 44-year old also revealed that he would love to play with the world’s most expensive player Neymar at Paris Saint-Germain.
World Cup Qualifier: Gernot Rohr Names Strong 23-Man Squad For Zambia Clash [See Full List]
Okocha had a stint with PSG during his soccer career.
“It would be an honour to be in the same dressing room as a player like Neymar.
“It would be in my interest to have great players around me because, if you’re playing with good players, it makes your job a lot easier.
“He had a good life in Barcelona, playing with a good team. But then he realised he wants to achieve more, he wants to be his own person and for him to achieve that, he has to move.
“Luckily for him, he moved to a very formidable team — a team that is so ambitious — and also trying to get to the next level. It’s a perfect move for him.”