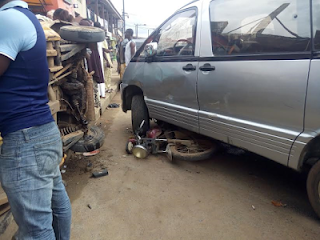 A commercial driver has been reported dead after his car collided with a Volvo truck at Ogbere, along the Ijebu Ode-Ore-Benin Expressway.
The victim’s car, a Toyota Sienna with number plate, AGL 141 EL, had a head-on collision with the Volvo with number plate, FKJ 27 XT, after he drove against the traffic light.
The accident occurred around 8.31am on Wednesday.
The Toyota Sienna was said to have been loaded with frozen poultry products, Punch reports.
The Public Relations Officer, Ogun State Traffic Compliance and Enforcement Corps, Babatunde Akinbiyi, said the corpse of the victim had been deposited at the mortuary of the state General Hospital, Ijebu Ode.
He said, “Our operatives at the scene of the accident said the driver of the Toyota Sienna drove against the traffic and rammed into a Volvo truck which was on the right lane.
“The driver, who was the only one in the car, died instantly due to the impact of the collision.”
Akinbiyi urged motorists to be careful and exercise patience when driving by obeying highway codes in order to curb accidents.
“Why should someone drive against the traffic? It is a breach of the highway codes and is unacceptable,” he added