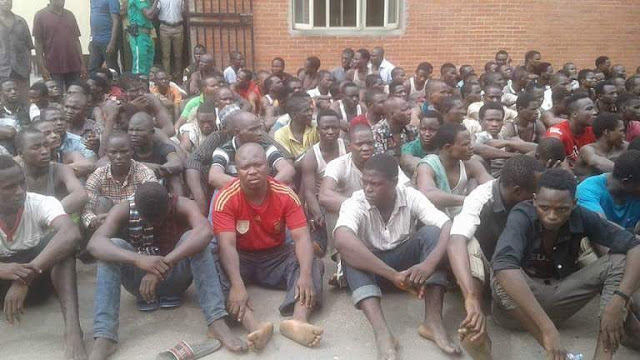 As part of the plans to ensure a safer and cleaner environment, the Lagos State Government destroyed drugs suspected to be Indian hemp and other illicit substances recovered from arrested hoodlums during the recent fracas which rocked Mushin community.

The product which was worth millions of naira was destroyed at the popular Olusosun dump site, Ojota by a team of the Lagos State Task Force alongside other operatives attached to the Lagos State Police Command.

Led by the Chairman of the Lagos State Task Force, SP Olayinka Egbeyemi, the enforcement team burnt drugs such as codeine, Indian hemp and other outlawed drugs in compliance with the order of Magistrate Tosin Ojuromi of the Lagos State Mobile Court at Oshodi.

Speaking on the incident, SP Egbeyemi disclosed that Magistrate Tosin Ojuromi recently gave a ‘Court Order’ after the prosecution of 36 hoodlums arrested during the fracas between Alamutu and Akala-Elegba boys at Idi-Oro.

You would recall that during the fracas between the groups, innocent lives were lost while others were injured with properties worth several millions damaged.

Meanwhile, the Lagos Task Force has arrested another 115 hoodlums during an over-night raid carried out around Fadeyi, Akala and Idi-oro area of Mushin. The arrested suspects during the raid consist of 113 males and 2 females.

Speaking on the operation, SP Egbeyemi sad, “the Lagos State Commissioner of Police Mr. Fatai Owoseni had directed that all arrested 115 hoodlums be charged to court.”