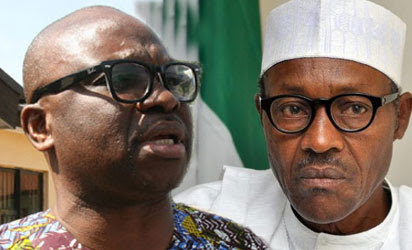 National Chairman of the Peoples Democratic Party, Alhaji Adamu Mu’azu, has responded to the threat of Governor Ayodele Fayose of Ekiti State to release evidence of Mu’azu’s “underhand dealings” with the All Progressives Congress.

The PDP National Chairman had faulted the calls of some PDP leaders on him and other members of the National Working Committee of the party to resign, following the heavy defeat suffered by the party in the recent general elections, especially its loss in the presidential poll.

Fayose, one of those pushing for the resignation of Mu’azu, had threatened that he would release incriminating evidence of the national chairman’s secret support for the APC, if Mu’azu pushed further his defence.

On his twitter handle on Thursday, Mu’azu, who is said to be outside the country, mocked the controversial governor, wondering if the Ekiti governor’s “evidence” would not be like his “evidence” during the presidential campaign, when Fayose said he was sure that the APC presidential candidate, Muhammadu Buhari, was dying in a London hospital.